Do You Know Your Food's History?

This morning’s sunrise brings the second snow of the season. Thanksgiving is a few days away and today we are invited to a turkey slaughter at the Alexander farm in rural Wisconsin. At first, I am apprehensive. Why would I want to see something so gruesome? Yet I have been immersed in this country community for several months now, learning how country boys, and women, survive. I take a deep breath and agree to attend the event and rationalize that it will be good for me to see where my food comes from. 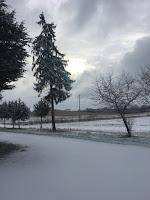 The frozen snow crunches under our rubber boots as my husband and I make our way to the garage. In the summer the garage door is mostly open while friends and family wander in and out, sometimes stopping to share a beer at the end of the workday. But on this blustery day, it’s all business. The roll-up door to the garage is closed so I follow the blood splatters on the doorstep and go through the side door. I see two men gutting a large turkey. Two more carcasses are on the floor, headless, yet not motionless. 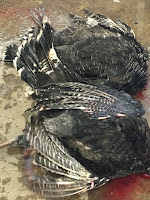 One man is teaching the other how to slaughter and dress a turkey. It is a skill being passed father to son. It is not a pleasant job.

A sack at the base of the tail must be removed in one piece to avoid contaminating the meat. The technical name is Poop Sack. Dwayne, the father, and a seasoned farmer is satisfied with the poop sack removal and directs his son, Dale to remove the crop located at the top of the carcass. The crop that grinds the turkey's food sits in the neck cavity where we sometimes cram extra stuffing. Dale again turns his attention to the bottom of the turkey. A few more pulls and yanks and out comes intestines, a gizzard, lungs, heart, and liver. I am thinking, broth for the gravy. Well, everything except the intestines. 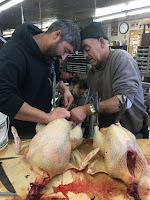 It is time to kill the next three birds. This is the part that worries me. I have loved animals all my life. I am a spiritual woman that respects all life forms. I cannot stand to see anything, even an insect suffer. Yet here I stand on a Saturday morning prepared to witness a beautiful brown turkey’s life terminated for the sole purpose of feeding my family in a few days.


Before you start to judge these folks, let me explain how Dwayne found a nest of wild turkey eggs in our pasture last summer and did his best to incubate them and turn them back in the wild. His efforts did not succeed and most of the eggs didn’t hatch or the chicks were too weak to survive. But the point is he tried. He adores his Shepherd, Toby, volunteers at the local cancer center, participates in community fundraisers, always has several grandchildren and their friends running around on the farm, and has been teaching us city folks the fine art of country living. 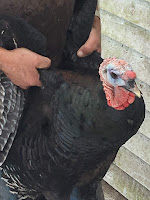 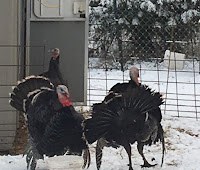 Dwayne walks into the turkey pen and grabs the first bird within reach. His dark brown feathers  glimmer with a green shine. The bird is surprised and silent as he is dragged to the chopping block to meet his maker.

“Yeah, he’s a good one,” Dwayne replies. Dwayne believes you get a better turkey if you let the blood bleed out before removing the head. He holds a knife in his hand and the bird's neck in the other and before I know it he sticks the blade into the bird’s neck. Again, not a noise from the bird. The turkey looks directly at me with his black eye. I feel guilty and wonders if he is asking, why are you doing this to me? Dwayne stabs again and dark red blood spurts from an artery and splashes on the white snow under the bird’s feet.  The turkey stumbles backward as life ebbs away. He sits on the ground going into shock. Soon he cannot sit up and falls over. Wings and legs continue to flop.

He’s dead,” the ten-year-old grandson says. I secretly say a prayer thanking the bird for his sacrifice. 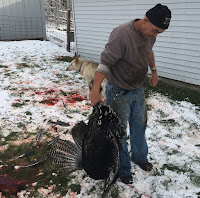 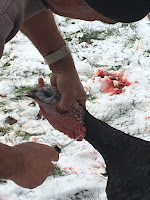 “He’s not dead yet,” Dwayne cautions. “Keep away or he’ll splatter you with blood when he goes to bouncing around." When the bird is motionless and the snow covered in blood, Dwayne picks up the body and with one to two whacks, the head is severed. 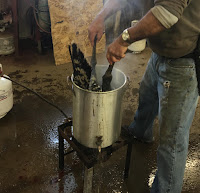 My husband leans close to my ear. “Pretty graphic.” I look at him and turn away, grateful I did not have any breakfast.

Inside the garage, a vessel that appears to be a deep fryer attached to a propane tank is boiling water. Each bird is held by the feet and dunked in the water to immerse the entire carcass. Chad, Dwayne's other son is experienced at this task. "Three to four dips is all you need or you burn the skin." The steaming bird is ready for plucking.

The plucking table is surrounded by four people and each pair work one bird. Joe rolls up his sleeves and jumps in. “It’s not that difficult,” he says over his shoulder. You should try.” The room smells like feathers and humidity. I am wearing my one and only winter jacket and do not want it covered in wet feathers.

“No thanks, I’ll document the event,” I tell him. Remember, this is educational.” 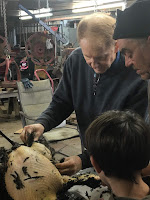 One of Dwayne's grandsons turns around to ask me, “Do you kill your chickens?” He is speaking of my sweet laying hens.

“Well,” I reply, “Hell hasn’t frozen over so no, I don’t kill and eat my chickens. They have a face and a name and are given a proper burial in my backyard at the end of their days.” The farmers laugh out loud. They are often amused at my city girl outbursts.

In short time all that is left is the tail feathers. Wings are trimmed and the bird is passed on to remove the entrails. The cycle continues until the birds are washed, bag, weighed and labeled.

I wander outside and three greenish, blood covered turkey heads lay on the ground near the chopping block. This bothers me. Of all days to snow it was today, bringing to light what is really going on here. The words of a farmer I met last summer at the Baker Creek Seed Festival ring out in my head. He said, “People need to know where their food comes from. It sure don’t come from a grocery store. You gotta know your food’s history.”

I know the history of these birds. It was a hot June night when I first saw them, they were light brown, still with some yellow down feathers, about three to four inches tall. They grew up on this neighborhood farm with a kind man, who raised them with wholesome feed, didn’t shoot them up with antibiotics and hormones so their breasts would get so big they'd fall over. He gave them a good home and a good life. Now it was the end of their lives and they would go on to sustain ours. 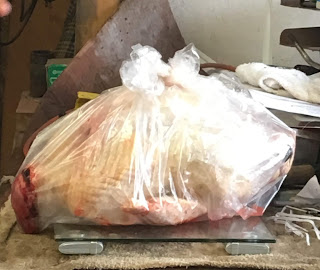 I wonder what other city folks would have taken away from this experience. Gratitude? Fear?  Shock? Perhaps a new respect for life and our food supply?  Would they become vegetarians?  When Saturday Night Lives comes on that evening and they show a celebrity hugging a brown turkey, Joe and I squirm and groan a little, bringing to mind the beginning of our day. Soon I will prepare my bird as I always have, say a blessing over the food, but this year will be different. I will remember the cycle of life and how all beings have something to contribute to life.

Posted by Josephine DeFalco at 7:56 PM No comments: